The definition of an entangled state in quantum physics can be rather simple: It says two quantum objects cannot be described separately anymore, only together.

If one wants to show that a quantum system is entangled, usually a so-called “Bell inequality” is employed. In the case of polarisation entangled photon pairs (as emitted from the quED), the so-called “CHSH” inequality is often chosen.

Classical (“local realistic”) theories predict that a certain value “S” has an upper bound of 2 (meaning S<=2). When quantum theory is used to calculate the corresponding value, S can exceed a value of 2, the new bound is 2*sqrt(2).

Practically, the S value is determined by measuring the coincidence count rate at 16 different polariser settings and adding and subtracting these values. So, we put one polariser in each arm: 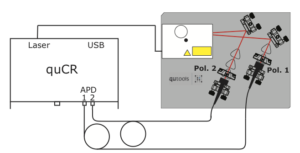 The quCR software helps you with the measurements and outputs the S value and the amount of standard deviations (n) the Bell inequality has been violated by. 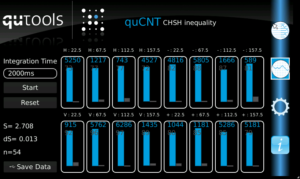 We said that any S value above 2 shows it is an entangled state. Here we measured S=2.7, so the state is well entangled.

This is what we have measured: 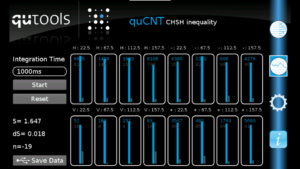 What does this S value mean? Is this state entangled or not? Can it be explained by local-realistic theories?