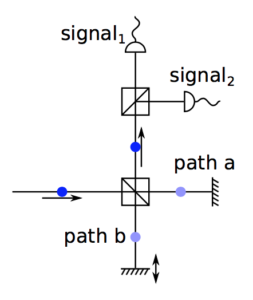 We start with a Michelson interferometer (quED-MI) and add a Hanbury Brown and Twiss setup (quED-HBT) at the output of the Michelson and connect that to one arm of the quED: 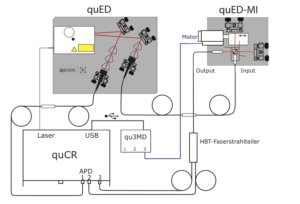 Now, we look at two-fold and three-fold coincidences. The interesting two-fold coincidences are those between the arm directly connected from the down conversion to the one detector (called idler) and one of the two other detectors (each at one output of the HBT). These are the green and purple curve in the screen shot. We see interference patterns in both of these count rates, if we plot them over the path length difference in the two interferometer arms.

The three-fold coincidences are plotted in the grey curve in the screenshot and show that there were more than one photon in the signal arm. This coincidences are always close to zero. This confirms our hypothesis that photons cannot be split up and there is mostly only one photon pair produced by our source and detected by our detectors. 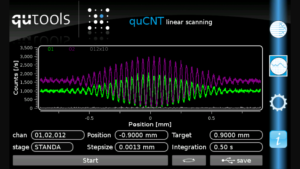 Why are there still some three-fold coincidences? Do you have an explanation? Is our assumption incorrect? Or is it what experimental physicists call “experimental imperfections”?