At the Laser – World of Photonics 2017 in Munich, we had a slot car race game which we called “quRace”. Our quTAG was used to determine the lap time with ps precision – a bit of an overkill, but fun to see. 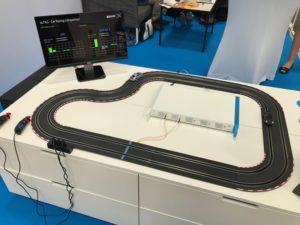 Here are some statistics about the race: In total, 227 races were played with a total of 3400 laps. The outer lane was more popular. “Frank M.” and “Woody” were the most active players with 13 and 9 races – but remember: Only the first three races were allowed to enter the competition.

(*: not ranked because of too many races)

To summarize: It is an unusual application for the quTAG, but we all had a lot of fun! Thank all of you for playing!
Read more about the quTAG here: https://www.qutools.com/qutag/