Förster Resonance Energy Transfer (FRET) is a process where the energy of an excited dye (named donor) is transferred to a second dye (named acceptor). This energy is transferred emission free and is dependent on the distance between the donor and the acceptor. It can be observed up to a distance of about 10 nm. 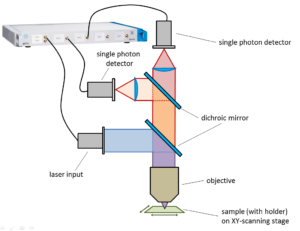