Quantum physics tends to look like “magic”. This is one reason why it’s so quool. Cool, actually. Very cool. Very, very cool. “As-cool-as-it-can-get”-cool. Like in “absolute zero”. Which is really cool, because enthalpy and entropy reaches zero. No temperature at all, meaning no energy, no movement. We know about this limit of the thermodynamic temperature scale because of the “law of Gay-Lussac”. And the closest we could get to Zero Kelvin or −273.15 Celsius was something like 0.45 nK.
Which is damn close, to be honest.

But if you try to cool something to an even lower temperature, things get very complicated. Quantum effects appear. And heat things up, so to speak. That’s the so-called quantum backaction limit.

And that’s cool, because sensors will become more sensitive. Information will be storable for a longer time. And future quantum computers could compute with lesser distortion. Giving more appropriate answers.
And John Teufel and its team achieved this by “squeezing the light at a ‘magic’ level” as he is quoted by Photonicsonline.
You can find the paper “Sideband cooling beyond the quantum backaction limit with squeezed light” here. 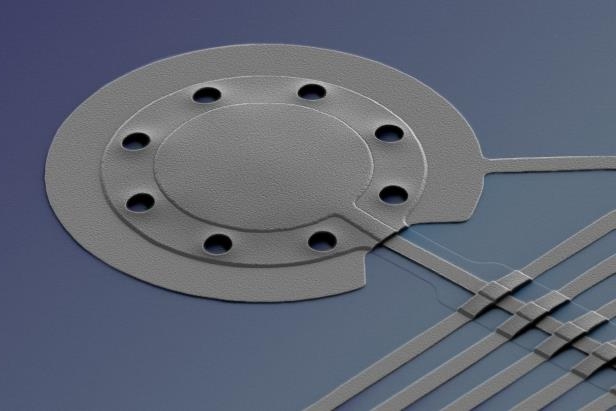 The picture shows the “aluminium drum”, which is only 20 micrometers in diameter and 100 nanometers thick.